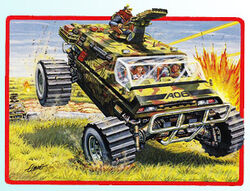 Vehicle-mounted Weapons are a broad category of weaponry that can be mounted on and fired form a movie vehicle or static weapon emplacement. Unlike normal, hand-held weapons, these systems require special mounting gear, ranging from simple pintle mounts, to armored turrets. They take up vehicle slots (called space), and have an added cost for a mounting fee (cost to mount the weapon on the vehicle to a fixed mount).

Vehicle-Mounted Machine Gun: A large caliber (12.7 mm) weapon with a greater muzzle velocity than a portable machine gun. Baffles surround its barrel so that the muzzle flash is not visible at night. A vehicle-mounted machine gun takes up two spaces on a vehicle, and costs 750 credits to mount it; same with the basic machine gun.

Vehicle-Mounted Rocket Launcher: This uses longer, larger rockets than the basic version. Note the different rocket calibres; one vehicle rocket launcher cannot fire both. Also note that in jetcopter and aircar weapon pods, the rockets are each mounted in a separate tube; any number of rockets may be fired in a single turn. A vehicle-mounted rocket launcher takes up two spaces on a vehicle, and costs 750 credits to mount it; same with the basic rocket launcher.

Cannon: This is a basic 30 mm cannon. A cannon takes up four spaces on a vehicle, and costs 1,250 credits to mount it.

Howitzer: This tank weapon is included for the sake of sheer overkill. A howitzer takes up eight spaces on a vehicle, and costs 2,500 credits to mount it.

Guided Missile: Guided Missile platforms come in four sizes. Each size category holds 1 missile, takes up 1 space, and costs 200 Credits, plus 300 to mount. All Guided Missiles available can be fired in one turn if so desired. They are an exception to normal combat rules.

The cheap missile (1000 Credits/30d10) is guided by joystick movements of the gunner and finalizes its own aim with infrared sensors. The basic chance to hit is the gunner's DEX +20, as a percentage. All modifiers are applicable; range modifiers are reduced three categories if the gunner is wearing magnigoggles.

The expensive missile (3000 Credits/60d10) is programmed with a target before launching, and is totally self-guided. Programming takes three turns during which the gunner can take no other action. The chance to hit is 95%, and no modifiers are applicable.

Missile acceleration is 150 meters/turn/turn, top speed 1500 meters/turn; a jetcopter or aircar with a head start might be able to outrun a missile for its 10 km range.

Bomb: This is a dropped weapon, mounted on jetcopter or aircar pylons. Statistics for light and heavy bombs are given. Light bombs takes up one space on a vehicle, while heavy bombs takes up two spaces, and both costs 50 credits to mount them.

Mine Dropper: A shot from this weapon drops 5 mines on the road behind the vehicle. Distribution is determined by speed and maneuvers during the dropping turn. If any vehicle subsequently passes over them, the mines will detonate on a 50% activation roll. The 5d10 damage figure is per mine. This is a generally useless weapon for flying vehicles; the mines spread too much when dropped and explode on impact if dropped over 5 meters. A mine dropper takes up two spaces on a vehicle, and costs 500 credits to mount it.

Sprayer: Various vile substances can be loaded into this. The most useful three substances are smoke, paint, and oil.

A smokescreen forms a 50-meter diameter cloud, blocking vision and IR sights but not radar. It lasts 5 turns; any vehicle going through it is sightless for 1 turn.

Paint sprays cover an area 10 meters x 3 meters behind the vehicle, and they block vision (but not IR or radar) by coating windows with paint. The paint lasts until scrubbed off. Paint will also completely ruin a coat of reflective paint; it cannot be removed without also removing the reflective paint beneath it.

Oil jets form a 20 meter x 2 meter slick. The driver of a vehicle traveling faster than its Turn Speed who encounters a slick must make a Reaction Speed check or lose control of the vehicle. An Explorer has a +20 on the control roll. Hover vehicles are not affected at all.

A sprayer takes up two spaces on a vehicle, and costs 500 credits to mount it.

Retrieved from "https://starfrontiers.fandom.com/wiki/Vehicle-mounted_Weapons?oldid=9814"
Community content is available under CC-BY-SA unless otherwise noted.