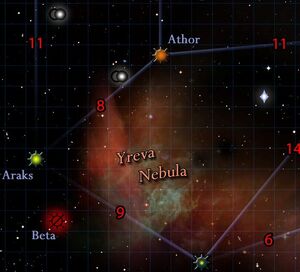 Yast is the only habitable planet in the Athor system. It is a world predominantly inhabited by Yazirians. It is moderately populated and focused upon agriculture. Its gravity is 1.0 and its day is 15 GST hours long. No man-made satellites orbit the planet but there are two moons: Exib (which is used for agricultural purposes) and Ime.

Athenian Democracy. All permanent residents of Yast vote in semi-annual elections. There are no 'politicians', instead every citizen serves a 2 year term depending upon need of their skills, volunteering when convienent, and random selection. Those who do well are paid well for their work. Corruption in this system is balanced, as everyone plays a part in the government eventually. Felons are of course removed from rotation (or occasionally put where their skills are needed but they can do little damage) and also pay a higher tax rate later.

(CR 1-2) Most weapons are allowed because of the harsh environment. Zamira dueling deaths and related injuries are not uncommon, these honorable deaths are not pursued by the law as long as they are registered properly. Weapons of mass destruction are likely to cause attention of a somewhat autonomous and not always trustworthy police force. Use of such in public places is likely to be met with 'questions later'.

The culture of Yast has been shaped primarily by two things: the original break from the theocratic government of Hentz and the harsh environment of Yast. Much of the culture was constructed from 'heretical' beliefs from the past of Hentz (and Waloo) and continues to react against Hentz. The official language of the planet is Gnarsh. The enforced expression of job and social rank on Hentz became a private matter on Yast. A person's profession is intimate information, though not a matter of shame. This has somewhat led to a double-life for those who work in service and public relations industries and has led to a reliance on robots or foreigners for many of these positions. The system of government also serves to equalize the status of all individuals, as opposed to an elitist hierarchy. This common ground is often the topic of casual conversation. Despite these differences with the society of Hentz, the Zamira and life-enemy are both held in high regard.

The environment has also played a key role in the shaping of the culture here. The harsh desert and little food led to Exib, and now crop in near desert areas. refugees had a hard tough life dour and grim folk even for Yaz "Dragon Hunting".

Eventually a Yazirian from Yast is going to push a high-priest type from Hentz into a pool and cause a big stir.

Retrieved from "https://starfrontiers.fandom.com/wiki/Yast?oldid=13511"
Community content is available under CC-BY-SA unless otherwise noted.